Now here’s something weird for you: in traveling from Penticton into Washington state we passed through four towns starting with the letter “O”! They are Oliver, Osoyoos, Oroville and Omak. Two on the Canadian side of the border and two on the U.S. side.
There must be something in the water, and there’s plenty of it. These towns are all strung out on the Okanogan River, which supplies endless water for irrigating an abundance of fruit crops, but most especially cherries. We’ve got a big batch stashed in the fridge: just too good to resist. But I am sure glad we didn’t buy them north of the border. Why? You’ve probably figured it out, but straight away we got our suspicions up about why the grand old U.S. of A. likes to refer to itself as “the land of opportunism” (I know it’s meant to be “the land of opportunity, but bear with me).
We were asked at border control if we had any citrus products. We didn’t, so we answered “No”. Nevertheless we were asked to pull over for the food check. Sure enough, they confiscated most of the lovely fresh, organic produce we’d bought the day before at the Penticton Farmers’ Market. But instead of putting them all straight into a bin as is the case when you come into Tasmania, the lass piled them on to a table with all the other great looking fruit and veg from earlier in the morning. Di reckoned that she was saving them for later - maybe because they don’t seem to be so big on the organic thing on the southern side of the border and the Canadian stuff is better!
The next example of how things work here in the Land of Opportunism is when we had to go into the office because the special visa wavers we’d bought - and paid for - were supposedly not valid for land entry, only if one arrives by plane. (Before leaving Australia we went through the process of completing the necessary documentation, stating that we’d be driving into the States from Canada). The border official could see when he scanned our passports that we’d done all the necessaries, but insisted that we needed to complete paperwork and pay additional monies to be allowed into the country. Hmmmm. Not too smart, I reckon. We also had to give an address where this fella reckoned he “could find you if I come looking for you”. It didn’t seem to matter that we weren’t going to stay in a hotel or at anyone’s house for any length of time. We had to give an address if we wanted to come in. Realising that we had a booking for a campsite at City of Rocks in Idaho for a week, we offered that. Mr Border Guard was happy with that, even though we’ll only be there for about a quarter of our stay. Interesting.
After finally clearing customs we rolled on down the beautiful Okanogan Valley and into Omak. The slogan on the sign at the entrance to town is “Kick back in Omak”. We stopped here because we wanted to buy a shovel, particularly a folding shovel like G.I. Joes carry (the idea was to get something that would be easy to store away in one of Big Blue’s footlockers).
Well! Wallmart, where you’re meant to be able to buy anything, didn’t have G. I. Joe’s shovel. It was suggested that we might try the Home Depot (pronounced “Dee-Poe”. No good. But everyone is just so helpful and we were steered in the directing of Big R. Wallmart, Home Dee-Poe and Big R are all megastores, bigger than your average Bunnings, and all within a couple of miles of one another on the edge of town ( we actually walked from Wallmart to Home Dee-Poe and back because they were right next door to one another).

Big R didn’t have exactly what we wanted either, despite a lady who worked in the Horse and Hay section telling us she knew they used to have them because she’s sold them and has one herself for when she goes back-country on horse trips. There was no way we were going to leave Big R empty-handed, especially when their sign looks like this: 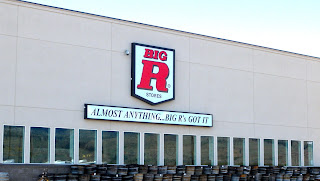 We bought the next best thing, and now the shovel ($10, tempered steel) - along with a couple of bungee straps ($2.50) lives on the roof: 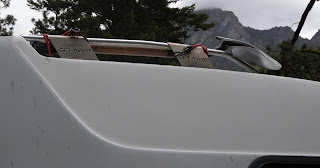 That’s actually all we bought, despite being sorely tempted by a myriad of fascinating and diverse merchandise including the biggest bunch of guns I’ve ever seen ... 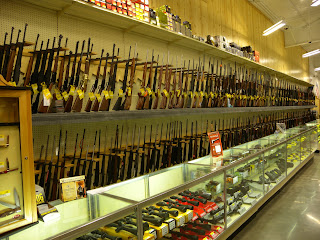 ... a whole slew of high-lift jacks at a price that would have our 4-by-4 gear freak Alex Wilson drooling ... 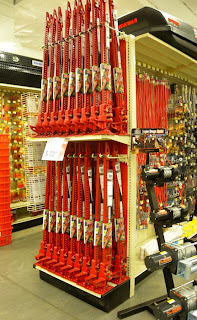 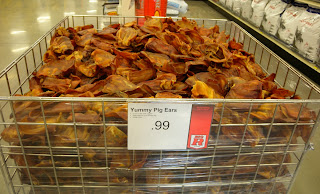 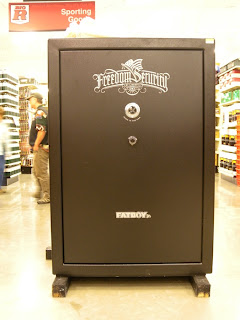 So, it’s on down the road. Next stop was a gas station and an ATM to fill up Big Blue and fill up our wallets with the folding paper stuff that all looks the same. This was Di’s next instance of identifying the Land of Opportunism at work: it cost $2.50 - the same as a couple of bungee cords! - to get some cash, which was the most we’ve seen on our travels so far. Another stop allowed us to get some beautiful Okanogan cherries and replace some of the fruit and veg that was appropriated at the border.
As we neared our destination for the day we caught our first clear glimpse of the Cascade Mountains through Big Blue’s windscreen not the greatest photo but exciting nonetheless):

By the time we got to Leavenworth and motored up the Icicle Creek Road, it was getting late and time to find somewhere to camp for the night. After driving into a couple of pay campgrounds, seeing that the fee was $17 per night and taking a punt that we’d be able to come back if we didn’t find some wild camping somewhere, we drove off on a little dirt road and ended up here: 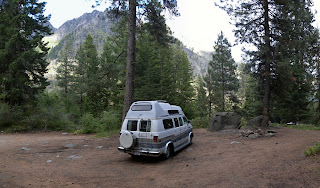 And we finally managed to get to sample what Border Security would have liked the most, some of the Cannery Brewery in Penticton’s finest concotions: 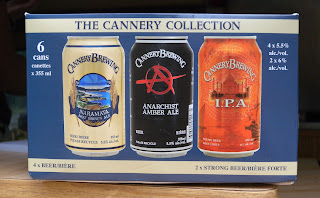 We needed to do a major shop yesterday, and wanted to see if we could get a phone plan with calling minutes and data so we could check email and hopefully tether the lap top. There’s nowhere in Leavenworth to conduct such business so we drove off to Wenatchee. Di spotted a Bank of America branch, so we pulled in to cash her refund cheque from Patagonia. (It was for a jacket that Di bought in 2005 and, sure enough, Patagonia honored their lifetime warranty). It was a Bank of America cheque, so that seemed the logical place to go. Yep. Land of Opportunism: they charged $6 to cash a cheque drawn on their bank. Anyway, we couldn’t get any type of pre-paid phone deal for a month that would allow us access to the internet for less than $90, and they couldn’t guarantee that we’d have coverage where free WiFi wasn’t available.

The rain has dried up and the sun is out, so it's time for us to go for a hike and look at some rocks to climb.  In the meantime, here's our route from Penticton to Leavenworth: 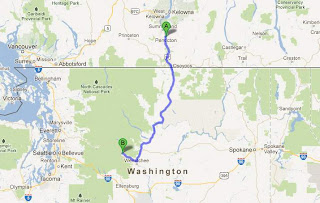